Three Cups of Tea is one exceptionally good read. The fact that it became required reading for the US military going to Afghanistan and spent several years on bestseller lists shows just how important a story it was felt to be. It starts off with a man’s dream to climb K2 in tribute to his sister, who had passed away. After losing his guide, and near death, he finds rescue in a small village in Afghanistan. While there, the people nurse him back to health, and as he recovers, he realizes how much they are giving him when they don’t have much of their own. He sees the children gathering outside because they have no school building, and are using sticks in the dirt to try to do lessons without a teacher in sight. The teacher can only come to the village once every few days since the villagers could not pay the teacher’s salary of $1 a day to get him there every day. Seeing how much they want to learn, Greg decides he’s going to thank them by building a school for them, and so the adventure begins.

In his life changing journey to help children in Afghanistan, we get a glimpse into what life is like in Afghanistan, particularly for those who are poor. Greg ended up founding the Central Asia Institute (CAI) which focuses on bringing education to all children, including girls, which goes against Taliban ideology. Education can make a huge impact on the lives of everyone in the community. The importance of including girls in the education cannot be stressed enough. Women with schooling make better mothers, with evidence showing that educated moms have better luck keeping thier sons from joining extremist groups. Better education for women also means better health care and family planning decisions, the ability to get jobs, as well as an increase in self-worth, esteem and status in their communities. An educated woman is no longer a burden or a commodity, but a resource.

It’s not all a bowl of cherries though. Due to the idea that girls should not be in school at all there are dangers involved. Acid attacks on women, attacks on the buildings, students and the teachers themselves can and do happen. However, often all this does is strengthen the determination of those wanting an education and wanting to better themselves. There is also a follow-up book that continues his story called Stones Into Schools. 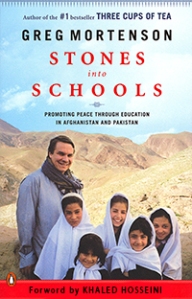 Originally, I was planning on stopping here, but the little researcher in me just can’t let things be. Sometimes it’s a handy quirk to have. I had decided to do a little poking around for videos and interviews and stumbled upon a 60 minutes episode that claims that the story is a fabrication, and that funds for this charity were mismanaged.

The American Institute of Philanthropy did an investigation showing that the money being spent on “domestic outreach” in the US in 1999 was actually 59%, which is more than the 41% of funds that was actually being spent on the schools overseas. This is extremely troublesome to say the least. Going over to charity navigator’s website shows a donor advisory page that details allegations, reports and responses from the institute to questions 60 minutes asks. CAI advises that the outreach in question occurs in the US and abroad and that this education is vital for securing donations. The sales from the book and speaking fees (which sometimes were paid and sometimes were free) were not going to the charity, but the costs for Greg’s travel and book promotion were coming from the CAI coffers. It seems that CAI felt that the amount of money that Greg was bringing in from his book tours in donations exceeded what he was getting for himself. So, his travel and book tour costs were less than the donations that directly benefited the organization. You can read Greg response here and the CAI’s response here.

Such a complicated mess this book review has turned out to be! Is 3 time Nobel Peace prize candidate Greg actually pilfering funds inappropriately? Or is he doggedly devoting his life and energy to a worthy cause and allowing CAI to overcompensate him? Are they actually over compensating him, the creator of the charity, by paying for a book tour that puts money in their pockets? They do state that he has donated thousands of his own dollars and worked for several years without compensation. But where does one draw the line between where Greg ends and his charity begins? Was this line properly drawn before the millions started flowing in? Why have they only had one financial audit in the 14 years they’ve been running? And what about the allegation that the story above was embellished, along with another where he claimed he was captured and held against his will by the Taliban?

In an interview with Outside magazine, Greg concedes that he was not involved in the writing of the book as much as he should have been. He had tried to write a book, but the publishers just found the writing bad. He eventually hooked up with David Oliver Relin who chose to present some of the facts in a compressed manner, merging several visits into single extended visits. And that, friends and neighbours, was the part where the truth gets a bit distorted. Greg advises that he was travelling a lot during this time, so he was not as involved as he should have been in the process. Badly written on his own or not, bringing in a second writer seems to have been a big mistake. It seems that what we have here now is less a nonfiction memoir and more a beautiful lie. This is too bad, particularly because the cause itself is so vital to help bring families out of poverty and into healthier and more secure finances and futures. You don’t want that part of the story to be cast in doubtful shadow too. That’s really not fair to the children that the charity is trying to help.

So, should we be impressed with the fact that at least 41% did go to the project? Yes, because otherwise it would not have. That still means lives were changed, and poor kids are going to schools that would not have been here without this process. But it also brings a vital point home. When working in the charity business, you have to keep your records straight and transparent, or you can end up killing the cause you are trying to help. You also can’t mistake your good intentions for the charity itself, even if you are the one who started it and are dedicating your life to promoting it. When creating a charity, do not skimp on needed staff and audits to save costs, and never ever use the charity to promote your own book sales, unless you plan on pledging a percentage of those profits to the charity in question.

In the end, Greg has advised that he has been paying for his own travel costs since January, and has been ordered to pay back 1 million dollars to CAI. He has also been ordered to step down as head of the charity, and the board for the charity is now on a time limit to be completely replaced with new staff. This is probably the only way this charity can survive the backlash, so all of these changes should help it to recover. Granted, this kind of scandal will probably mean that there will be much less being donated, and it’s possible that the CAI itself may never fully recover to where it was at its peak.

So, was this a naive mistake, or a villanous theft? If you would like to better decide for yourself, I would still recommend the books (free at your local library), which do have a lot of information about the cause, Afghanistan, and the life and culture of the people in the rural areas of the country, as well as how things have changed and affected people since being under Taliban rule. It might not hurt to also watch the 60 minutes episode below, so you have a better idea where you may want to be sprinkling the salt grains you may need to take with certain parts. And for those of you who might want to help the children of Afghanistan now that several million dollars will probably no longer be coming their way each year from CAI, I’ve found a few charities that operate in the region that are rated as highly effective by Charity Navigator so have supplied links to their websites, and links to their charity navigator score pages below:

Other highly rated charities that are doing work in Afghanistan: