So, It’s time to reveal something. I’m a big Survivor fan. I know many roll their eyes and lament about the takeover of reality television (and in some cases I have to agree that they really are sometimes the visual equivalent to a train wreck), but Survivor has always been near and dear to my heart. Not that I’m trying to say it’s never a train wreck, because…well, it often is. But, it’s my kind of train wreck, and so with bated breath and wide eyes I watch it, season after season, greeting, loving, cheering, jeering and often then forgetting the characters after their several cumulative hours of fame. It almost feels like an addiction, and I’m not ready for survivors annonymous…well, not yet anyway.

I read the write-up for the first season, before it aired, in a newspaper in a claustrophobic little cubicle at a thankless telemarketing job I had, because…well… it was a job. Seriously, I did not choose it for the glamour, it was soul sucking. One can only be told “no”, “go away”, “@*&%”, etc. so many times in a day before it gets to you, but that is material for another post. Anyway, sitting there, reading about a game where you could win a million dollars (oh, yeah) and get to travel to exotic places (uh huh!) and get to be on TV (FAME! a.k.a the exact opposite of speaking to multitudes of people who hate you daily) was a dream come true. I knew I had to watch it. Then, I promptly forgot about it.

I wasn’t really in touch with what was on TV at the time (and things haven’t changed much in that regard) but when I channel hopped one night and landed on Survivor I was instantly hooked. I think I liked the human social experiment of it most, but it also had the ghost of possible danger, required skillsets including social savvy, physical strength or brain power that many just did not have, desert islands, and even better, almost always at least one crazy person, sometimes several.

This past season Survivor: Caramoan — Fans vs. Favorites had its share of crazy, but in the end ***************Spoiler alert**************Stop reading if you don’t want to know************that *****Cochran won and it just made me glad. I kind of can’t help myself but root for the underdog on Survivor, and although Cochran played a solid game that didn’t put him into this position much once things got going, I loved that his advancement came simply because he wasn’t a typical looking threat. Perhaps one day people will see brains for the threat they are instead of just focusing on brawn, but it does work to ones advantage when avoiding the ever wandering target of who will be next to get their torch extinguished. Plus, to see Cochran back, since he was a favorite of mine in the Survivor South Pacific season, until he got the boot, had me stoked, so to see him later win it was just that much better. 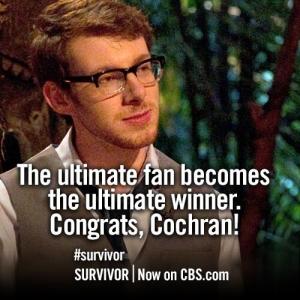 So, as this Survivor season draws to an end I can’t help but get a little sad. But eventually that will be replaced by excitement over what will be coming up next in the following season, Survivor: Blood vs Water. I’m still not too sure how this one will play out, but I will definitely be looking forward to the ride. There is some internet chatter that it might put relatives against each other, which could add an interesting element.

I also would love to see the following brought out in future seasons:

Sure, it kinda worked for Australian Survivor, but I think it would be interesting if the North American one I know and love gave it a try. Pitting the zany kings and divas from the A list and Z list together to raise money for charity or against past survivor champs would be an interesting matchup with the added bonus that fans get to potentially see what their fave celeb is really like. I think if they got the right people, ratings could go nuts.

Let Canadians play! Ok. I might have a vested interest in this one…maybe…eh?

So, what do you think? Are you a fan? Do you hate it? Have a show idea that would rock? I’d love to hear it, if only to draw out a few more awesome moments of my Survivor mania! 🙂