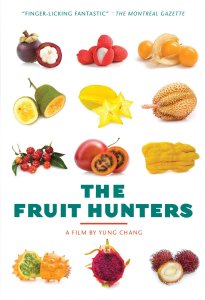 So, why would you want to watch a documentary called Fruit Hunters? Does it have an Indiana Jones type character in it exploring the jungles of a far away land in search of fruit? Actually, it kind of does, and I have to say I never thought that I would be spending the roughly hour and a half timespan sitting there alternately amazed, intrigued and hungry. Is it that I just don’t get out much (or hadn’t eaten)? Or is the movie just that good? I’m thinking its safe to say that it’s just that good, but when the movie started with this line:

“Is it strange that when I look at certain fruit I find myself a bit…aroused?” – opening line of Fruit Hunters movie (2012)

I was already rolling my eyes and ready for a trudge through mediocre waters with an amusing tanker of a documentary. You see, I’ve eaten fruit. How exciting could this possibly get? The answer? It was fascinating! When the intro peeled off from the seductive fruit images thing and then went into a cool digital animation of morphing fruit, they got back my serious face, since it was kind of neat, and then it really just got better, weirder and more interesting from there. It was fru-tastic! 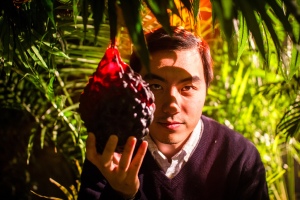 The movie, by Yung Chang, is actually based on a book of the same name by Adam Leith Gollner (which I now totally have to read) and it takes you on a fruit themed adventure through several different countries including Indonesia, Honduras, Borneo and the U.S. following people (I never realized there were that many of them) who are obsessed with fruit. Did you know that there are a bunch of rare fruit councils where fruit enthusiasts gather to talk and taste test? Or that there are several hundred different kinds of mango? Did you know that there are fruits out there that purportedly taste like ice cream (the cherimoya), maple/sweet potato/pecan pie (Lucuma), peanut butter (Bunchosia argentea) or a stinky fruit that can’t be taken on public transit in Southeast Asia as some think it smells like sewage yet it supposedly tastes like creamy French coffee/rich custard flavoured with almond (Durian)? That, my friend, is just the tip of the fruity ice burg.

Another interesting tidbit is that actor Bill Pullman, who has no sense of smell (random, I know, but interesting), takes up a fair portion of the movie, as he goes around finding and sampling fruits, showing his own backyard garden of exotic fruit, and trying to get a community orchard, Hollywood orchard, going. Like the many varied fruits the movie talks about it also goes into historical, economic and international issues, such as deforestation that puts wild fruit trees in danger, and how monocultures of the same plants are taking the place of the varied fauna that are removed which also create a myriad of issues.

Another interesting point for me was that as the credits rolled there was a different fruit pictured beside them and each picture lasted roughly 6 seconds throughout the few minutes that they ran. In the entire time that I watched them (as I am a self professed credit junkie) I only recognised about 9 different fruits and some of those only because they talked about them in the documentary. I never realized quite how much I was missing or that fruit could be so interesting and complicated. The movie was quite inspiring, and now all I want to do is go to my grocery store (or somewhere more exotic) and try a few of the things they have there that I’ve never tested before. Ice cream fruit, I will find you!

So, really, try this film out. See if you can watch it and not get excited about fruit. Really! It also makes me wonder, what is the most exotic type of fruit you’ve tried or enjoyed? Could you recognise the fruit in the credits? Let me know!

Sample the tasty trailer below: