There are some days I think that I have a crazy super power. You see, although I am a bit of a documentary fiend, I also have watched many a Hollywood movie and way too much TV. As a kid you would have to pry my half asleep fingers from the remote because I wanted to watch them all. I think I made a pretty good dent out of it overall, which is why I seem to feel like many movies that are out now are just slightly higher tech versions of something that I watched years ago, and they were better the first time around. However, sucker for punishment that I am, I still keep watching things, hoping for a gem to float up amongst the uh…non gemmy offerings.

Anyway, back to my crazy super power. I think I might just have some amazingly mad skills, since I seem to be able to do Hollywood facial recognition like a machine. A machine, I say! Why do I think this? Well, while watching a clip of Red Dwarf (see pic above) I noticed that the guy playing Olaf Petersen was familiar and immediately got excited. Isn’t that…Goat Face from Stardust (ok, his name in the show actually was Billy…but see the clip below to see what I mean. All you Harry Potter fans may be saying “But that’s Arthur Weasley” …well yeah, but Billy from Stardust was just so hilarious!)!!! And for all you wondering who I’m talking about, it’s actor Mark Williams who is currently playing Father Brown in a T.V. series by the same name, but I’ve actually never watched that one.

This seems to happen to me all the time. For instance, just this week I was watching G.I. Joe: Retaliation and noticed in the air plane that there was a dude who looked awful familiar…Isn’t that the kid from Jurassic park? So, once it’s over onto the net I go…and sure enough, Joseph Mazzello it was! 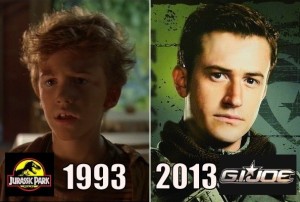 But it didn’t just stop there since it also just happened tonight. See, I got it into my head to watch the old Total Recall with Arnold Schwarzenegger and then the new one with Colin Farrell (which I’ll probably do tomorrow) just to see how they measured up against each other, when onto the screen comes this dude…

And all I can think is… Isn’t that the cop from Breaking Bad and the car salesman/politician from Under the Dome? He sure looks like Dean Norris…well, that’s because he is. 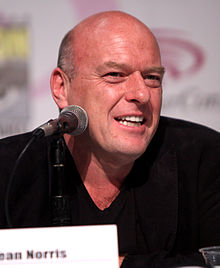 Perhaps this is not a real skill, seeing famous people in their super small roles, but I tend to occasionally impress my friends and family with it, so it’s not all that bad. And with the one above tonight, I kind of impressed myself.

How about you? Have you ever got excited for recognising the stars you know from one thing in smaller roles in something else? Are there any actors that you just love to see popping up in cameos on TV? Do you think you also have this  super power? Now if only I could find a suitable cape…