I happened upon this reality TV show on Netflix and I was instantly hooked, after all, it combines both my love of reality TV, challenges and horror! Oh yes, it is the very first horror TV game show that I’ve come across, so it required an immediate binge watch of the whole first season. Then I found out there was another season that was just added, so, as you can imagine, I’m one happy hermit!

How does it work? It’s reminiscent of Fear Factor, but not really. In the show contestants go to some pretty creepy places around this forested estate, and in a group of three (usually teams of friends or family) must make their way through spooky, bloody, adrenaline pumping, and sometimes outright nasty horrorscapes, deep in an English forest, in an attempt to win three cash prizes. Basically, it’s running the contestants through a kind of horror movie scene, when they have just applied to an anonymous ad to be on a TV game show, so many are not really prepared for this.

How do they get the prizes? First, they need to solve a puzzle/riddle of some kind to find hidden keys to chests containing money. When they get their key they can collect that money and put it in a backpack each contestant is given when they start. It’s not that easy though, as when a sound chimes while doing the riddle (except for the pilot which was a bit different) a set of gates on the race course slowly start moving towards – yes, you guessed it, a pack of excited hounds, who will race to tear that backpack off them before they can make it to the finish line. The better they do in the riddle, the more of a lead they get. Only one person can race against the hounds for each section and once they go off to race, they have to leave the group for good. In each of the challenges, teams must decide who leaves to run and who must go on to the next round so there is a bit of thinking required, but people are often so revved up or scared they see the run as a chance to get the heck out of there, which may not be the best choice to run for the money. As darkness sets into the forest, the third and final round leaves the final contestant to face the horror alone and in full dark. 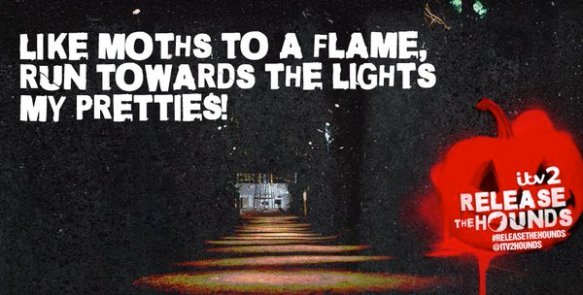 There is so much for horror fans to love about this show as it manages to play with all the usual suspects, ghosts, murders, asylums, clowns, body parts, bugs, actual people dressed in the scenes who flit in and out of them or stand motionless and then move, or might just creep up on the contestants in the dark. They do a great job in most episodes for building suspense. I’m also a bit surprised how many people are actually afraid of dogs, as I think that final race is generally the least scariest part (the dogs are just so adorably cute!) but almost everyone looks terrified.

Ok, maybe it’s not quite this cute…

I have never seen real people turning into the quivering, hyperventilating, screaming and moaning messes that this show actually turns them into, which I admit is pretty entertaining in an extremely morbid way. However on a brighter note, it’s kind of hard not to get caught up in it with them and spend your episode on the edge of your seat, rooting for them to win and cringing with them along the way. 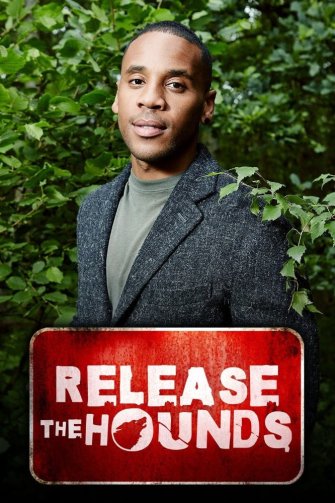 The host, Reggie Yates, is awesome, and and I couldn’t help but find myself giggling along with him as he comments on the action and occasionally talks to contestants through a walkie talkie from his control room where he’s monitoring the proceedings. I’ve heard in later seasons that they got a new host, which I am a bit sad about because this guy is so fantastic, but I guess I’ll have to wait and see if Netflix can get some more seasons up and see how they compare. The bar seems set pretty high though.

This likely isn’t a show you’d be interested in if horror isn’t your thing, and there is a lot of frightened swearing (or alternates – listening to Perri Kiely from the dance group Diversity – who you may know from Britain got talent – repeating “Fudge!” over and over  was pretty funny and was one of my favorite episodes) so be warned. Interestingly enough a few episodes did bleep a few words, which makes me wonder if they were just playing with the idea of doing it but gave up when they had to bleep through whole scenes, or just what the heck those guys were actually saying! They can’t be held responsible though, as I learned in You Can’t Lick Your Elbow, swearing or it’s alternates can actually help people cope with pain, so it goes to reason that it would work similarly with fear too. Poor contestants.

But enough chat! Want a preview? See the trailer below (or check out their YouTube channel for some clips – but beware of spoilers!):

Mini challenge update: Oh, yeah! I was supposed to be doing something this month wasn’t I? In typical me fashion, I have not. So, also in typical me fashion, I’m starting late and under pressure to finish my screenplay by Aug 1st. Oh, boy! I’d say I’m about 8 scenes away from the end…I can do this! Wish me luck!

1 thought on “Release the Hounds – Review”