Part of the challenge that I’ve been working on (I’m sure you’re sick of me talking about it by now) has been to practice drawing again. Ideally, I would really like nothing more than to be able to take some of the pictures in my head and put them on paper,  but I’ve found that when I do, they have a tendency to be cartoonish, weird and basically nothing at all like what was in my head. I just don’t have the skills yet, but I’d like to keep trying to get them (did some imaginary person say I couldn’t do this? Ha! I’m doing it!…Poorly…).

When I was a young hermit around preschool age I used to draw a lot, and papered the walls of my room with piles of my work. I would proudly tell people at the time that I would be an artist when I grew up (I think this actually preceded my wanting to be a writer, since at the time I was still learning how to make letters, so it was the first way I knew of telling stories. I guess I approached writing in a very caveman-esque way…).

Being young, I was still learning the ropes of proper behavior, and one day, when I got upset at something, and in what I thought was true artistic form, I decided to throw a fit by myself in my room. I rampaged around tearing everything off the walls and ripping them into itty bits. That’s what artists did when they got mad, wasn’t it? I had seen it on TV so figured that’s what you were supposed to do. It seemed impressive, if a little short sighted, and I remember thinking about trying it before and always thinking better of it. But this time I got really worked up and thought, today is the day!

Although, I do remember hesitating over some of my favorites, I decided to really go for it, and everything became confetti. It wasn’t until I was mostly through that I realized the enormity of the destruction and how bad losing everything made me feel (my walls went from wallpapered with work to bare). I learned an important lesson that day. Things people do on TV might not be smart, and perhaps you should not use them as role models. I never did anything like that again, and wondered why people would bother doing something like that in the first place. Didn’t they know how dumb that was?

After this, I immediately set to work re-drawing my favorites, and that’s when I came across stumbling block number two: nothing looked as good as it did before. Forests of smiling trees looked menacing instead of jolly. Mama bears portrait had a strange lopsided look and repeated workings couldn’t capture the greatness I thought I had achieved in my first go round (granted, this was pre-school greatness, but I was a bit of a perfectionist even then, apparently). Defeated by myself, I gave up, and although I did some drawing from time to time, the fire in my belly was out.

Fast forward to now. I have a lot of time to make up and a lot to learn about how to draw. I figure step one of drawing is to try and draw things you see, so I look for pictures and things that look interesting, and then give it a go and see what I can do with it. One of the concepts I’ve been having trouble with so far is learning the importance of getting proportioning right, and that more than half of drawing (for me anyway) seems to be erasing everything you just did and then doing it again and again and again…

It’s worth all that erasing though. One of the coolest moments I’ve found is near the end of a piece, when you start filling out the details, and you can really see what the finished product might look like. Occasionally, it doesn’t look so bad, and that’s really pretty neat.

The best one I’ve managed so far is a picture I found in a comic (Gail Simone’s magnificently dark Clean Room) and although it bares little resemblance to the picture I found, I was actually a tiny bit proud with the result. So, just for the heck of it, here you go, something from my sketchbook: 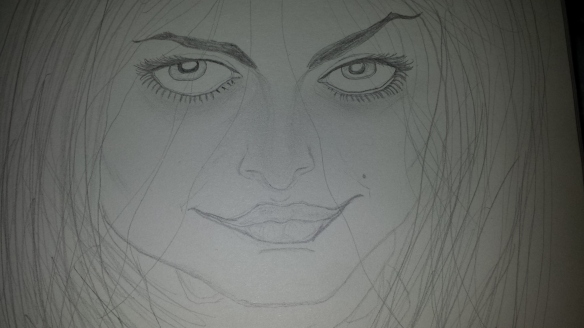 Do you draw? Any tips for newbies you would like to share or books/websites that might be helpful? Anything you find particularly difficult? I’d love to know! 🙂