I’m going to go with some more old Hollywood today, with a review of On the Waterfront. This film stars Marlon Brando and won 8 academy awards in 1954 (and a bunch of others), yet the reason I decided to watch it was because it was another film combo with Budd Schulberg writing and Elia Kazan directing. After watching A Face in the Crowd (which I talked a little about in my Andy Griffith post and completely loved since it was Andy’s first movie and he nailed it with a role that you just wouldn’t expect from him), I wanted to see if they could impress me again with another picture. In the end, they did, because, well…Brando. That kind of says it all. However, if a fight between On the Waterfront and A Face in the Crowd went to decision, I think I might just go with the latter (I can hear you gasping from here!) just because I loved it so much. It also could be that since On the Waterfront was made three years earlier these two were able to continue to bring it up another notch but Waterfront is definitely the critics favorite of the two. Comparisons aside (I know, enough already! What movie am I reviewing here?), this was a great film with lots of action and intrigue and is definitely considered one of the Hollywood classics you don’t want to miss.

I think in the end On the Waterfront lost some points because of how many movies I’ve seen with similar plot lines (although they undoubtedly were, admittedly, influenced by this film) it may have been more meaningful to me if I had seen it first. I can understand why this one would have made such an impact at the time, with its themes of standing up against the bad guys, family relationships, loyalty and betrayal. In it Brando plays Terry, a dock worker and boxer who has family ties to the mob. After her brothers murder, Edie (Eva Marie Saint in her first movie role) comes to the waterfront to find answers and recruits the waterfront priest (Karl Malden) to her aid. Terry was involved, and gets stuck between loyalty and his conscience and it doesn’t help that he’s falling for the girl along the way.

The best part, for me, as you may have guessed, was discovering Marlon Brando in action. He really had a magnetic on screen presence. Of course, I had heard of him and knew what he looked like, but admittedly, I’d only actually watched the Island of Dr Moreau and the Score years ago, so I really have been missing out on his better works. And yes, sadly, I’m one of the minority who still hasn’t seen the Godfather series. (I know, ’tis a crime. I am planning to do it but, in proper binge watching style, I need to find a chunk of time to knock ’em all down at once.) I have since watched Apocalypse Now so am slowly on the path to redemption and remedy of this travesty.

I also didn’t realize that the Iconic “I coulda been a contender” quote came from this film, (Yes, the rock I live under is just over there, thanks for noticing it! It’s large and sooo cozy!) and it was really interesting actually seeing it played out in context, but when I did, it gave me pause. The way he says this line in the film is nothing at all like how I’ve heard people quote it. I’ve heard the line said with vehemence, and usually with a gravelly, wheezy Bronx accent. When Marlon says it, the Bronx accent is there, but the rest of the adjectives above are nowhere to be found. This puzzled me. I’m wondering if people are perhaps mixing his godfather character with…well, the way he actually talks. I guess I’ve only ever heard really bad impressions, or maybe it’s just the easiest way to make people say “Brando!” when doing an impression, but, I think I digress…it’s always fun when a big quote sneaks up on you when you aren’t expecting it. Kind of like finding candy in your pocket (and not the linty kind, as that’s a different kind of moment). 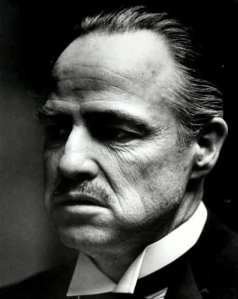 For anyone who would like a bit of a reminder, or perhaps see the quote for the first time like I did, you can find an excerpt from the actual scene below. Another interesting tidbit from the DVD’s special features: Marlon had a re-occurring daily psychiatric appointment and could only stay for his own shots, and the ones they did together, on the day this was filmed. So, the other actor in this scene (Rod Steiger) actually had to do his solo shots with the director Elia Kazan sitting in Brando’s place reading his lines.

It also may be a good idea to go find the rest of the film, if you have a hankering for some Brando, or just a good old time drama/gangster film, so I’ve included a trailer to tempt you. Have you seen this movie? Or do you have a favorite Brando film?

And for this weeks challenge update:

Until we meet again…