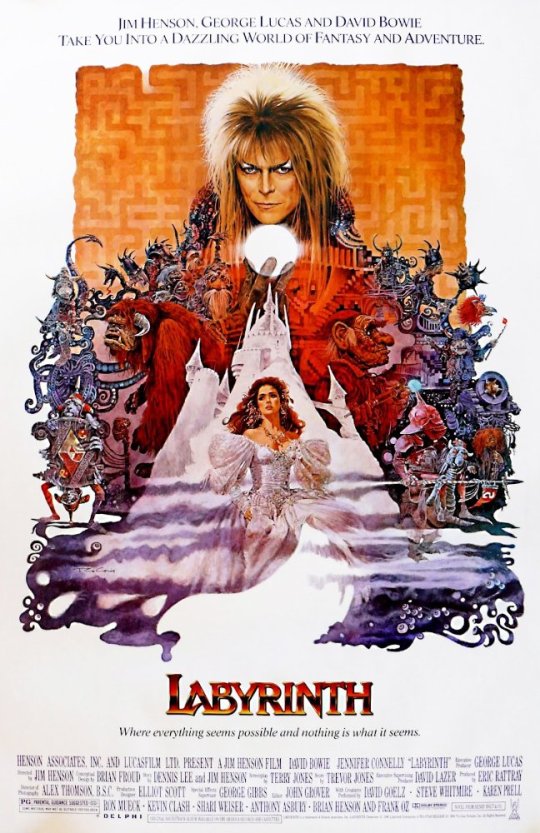 It’s only forever, not long at all.
The lost and the lonely
That’s underground.
-Underground by David Bowie from Labyrinth

What do you get when you mix writing from Terry Jones (Monty Python), Directing (and writing) from Jim Henson (The Muppet show/Sesame Street/Fraggle Rock), and production by George Lucas (er… I don’t need  to put what he’s done here do I 😉 ?)? You get a 1980’s fantasy musical film that flopped at the box office (it didn’t even make back half of what it cost to create, although it was competing with both Top Gun and Ferris Bueller’s Day Off at the time, the top and 10th top grossing films that year, respectively) but later garnered a huge cult following, and a dedicated space in my heart.

Although rumors have been circulating for years about the possibility of a Labyrinth 2, I’ve read just today from several news sources including the Guardian and CBC news that a sequel is indeed in the works. At first this worried me (I’m always worried about remakes) since I don’t want someone to butcher a film I hold dear. I also don’t really want them to do too good a job either, and then turn the thing I love into a laughable “old” version. However, from what I understand it’s going to be a new story set in the same world, so this seems like it could very likely allow for the best kind of sequel, where it can both be a homage and something new. The best of both worlds, so to speak.

Trying to review this objectively is a bit like a small child trying to objectively review their favorite teddy bear. I can see where some of the hair has fallen out and the threads are starting to unravel, and it’s eye might fall out if squeezed too tightly, but I just don’t care about that. I’ve squeezed the hell out of this movie growing up, and so all the camp and triteness of the plot is overshadowed not just by it’s amazing imagery, puppetry and artistry, and a sprinkling of humour, but by a heavy helping of love and nostalgia.

Sometimes the way forward is also the way back.
– The Wiseman, Labyrinth

It’s so stimulating being your hat.
– The Hat, Labyrinth

The show is all about Sarah (played by the lovely Jennifer Connelly), who is unhappy with having to take care of her baby brother. In a fit of dramatic teenage pique she holds the child aloft in the middle of a dark and rainy night and calls on the Goblin King (played by the amazing David Bowie) to come and take this burden from her. So, he does. She spends the rest of the movie doing her darnedest to get him back.

This movie came to me at a tender time in my life and the circumstances surrounding my first viewing of it are a little more personal than I normally would share in a movie review, but I think that it might shed some light on why it became so important to me. My family had recently changed and a new baby had been introduced, and I had been feeling rather outcast. I will always remember the first time we visited my beloved grandparents as a new family, as they normally lavished me with attention (and a special pet name), and feeling instead unceremoniously pushed aside. My Grandfather immediately started using my pet name on the new baby, and when I tried to explain his mistake (this was after all, my special name), he told me that it wasn’t my name anymore, it was the baby’s. He then said I could be known as “Fat Head” which was a more than obvious demotion even to my counting-fingers-on-one-hand aged self… So, yeah, I may have been in a unique position to identify with Sarah’s bratty disdain for her sibling since I was wrestling with issues brought about by slightly similar circumstances.

In fact, when I saw this movie for the first time, just a short time later, and the goblins took the baby, I ran away, horrified to tears. Now, I was already on my way into horror watching at this point so although my parents may have thought I was running away from the scary puppets, I actually remember being duplicitous and agreeing with that when in my secret heart I knew I was actually running away from something much worse. I was able to easily identify with doing the horrifically selfish thing that Sarah did. As I said, I had been struggling with this, and I recognized both why someone would want to do it and that it was horribly wrong, and through the lens of childhood and a first time watcher, Sarah was practically an adult and looked like she knew what she was doing, incanting those magical words that were nothing more than a simple wish. So in a way, this was the first horror movie I can remember, not because of the puppets, but because of the monster I saw reflected in myself. After some prodding, since creepy puppets was obvs something that I should have been a’lovin’, I came back out and watched the rest of the film and was completely enthralled. Probably too enthralled. I went on to obsessively watch this movie until I could turn the sound off and do every part verbatim, either with a friend (they played Sarah, I played everyone else), or alone with my stuffed animals as characters, costumes and props.

I ask for so little. Just fear me, love me, do as I say and I will be your slave.
-Jareth, Labyrinth

You see, it wasn’t just that I could identify with what she did. I could also identify later with the realization that she had made a mistake, and the desperation involved in wanting to fix it. I could see that sometimes it wasn’t the weird looking ones that were the scary ones, because sometimes the most monstrous ones were the most normal looking, and that selfish actions were truly the cruelest monster to be afraid of. Sometimes people did things without thinking everything through, and those whims could have repercussions they never could have dreamed of. It was the first movie I ever remember walking out on, so I also learned that even if you don’t like where something is going, if it hits too close to home, sometimes watching the whole thing will help you to make sense of it all. Not bad for a kinda campy 80’s fantasy musical.

So, just saying I really liked this movie would be selling it short. I lived this movie. Over and over again. It taught me it was o.k. to make mistakes if you fought to redeem yourself. That things aren’t always what they seem. That not everyone is out to help you. It also taught me that a few friendless outcasts could band together and try to beat back the goblins of this world, and that some things you have to face on your own. That David Bowie was amazing. That some words are magic. That you have to keep trying to make it right, maybe over and over, or only for forever…which is not long at all.

Have you seen this film? How do you feel about a sequel in the works? Let me know! And because I can’t leave you clip-less, here’s some 80’s goodness:)